These days I have been spending my time in Big Red.  She's a real beauty. 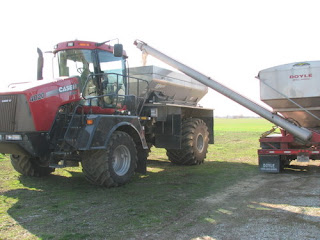 In addition to our farm, my family also owns and operates a Retail Crop Protection Business.  I spread all of the dry fertilizer for other farmers.  Fertilizer is just a fancy name for plant food.  Basically, nutrients are needed to grow a field of corn, soybeans, beets, carrots, potatoes, etc. 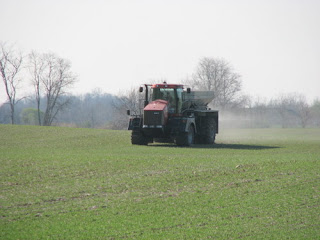 So I go out to the fields in ole' Big Red and pretend I'm a Monster Truck Driver. Well, not really, or at least not the whole time. 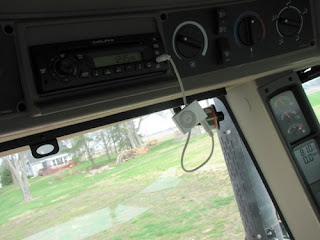 At times I'm too busy singing at the top of my lungs with my ipod.  It ain't no fancy ipod.  But I really add a lot to the songs of Johnny Cash, Beyonce, George Strait, and Aerosmith.  Put it on shuffle and talk about an eclectic mix of music! 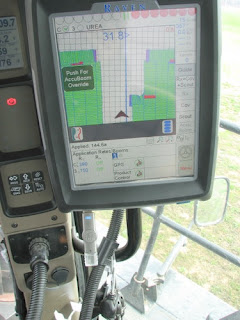 The only reason I can really have my own concerts in Big Red is because her computer is smarter than me.  The computer allows for auto-steer, meaning I only have to steer when I turn on the ends, it has dual bins so I can put two different fertilizers on at the same time, and it only puts fertilizer on where it needs it in the fields.  This certainly makes my job easier and I can go on pretending that I'm Martina McBride driving a monster truck in a field in central Indiana.
Posted by Abby@AllAround at 8:34 AM No comments:

I was asked to be a guest blogger for Indiana Family of Farmers!  Check out their link if you so desire to learn how farmers celebrate Earth Day every day!

Have a wonderful weekend!
~Abby
Posted by Abby@AllAround at 9:56 AM 1 comment:

If you live in Indiana, then you are all too aware of all the rain we are getting.  So in an effort for this farmer to stay positive, I'm posting some pics of what makes me happy on this rainy, wet day! 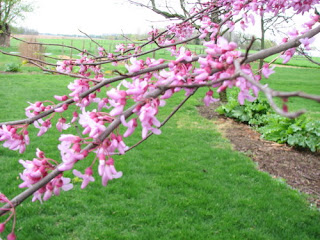 I'm loving the dainty blooms on my Redbud Tree. 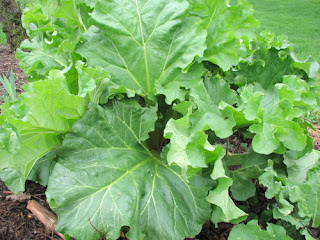 I'm loving that the Rhubarb is ready to be picked.  I'm going to make Pink Rhubarb Punch for Easter! 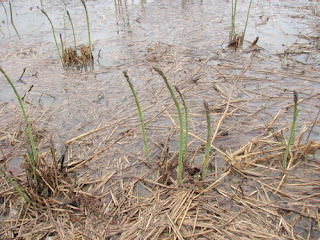 I'm loving that I have asparagus up!  (I'm not loving that it looks like it's in a rice paddy right now!) 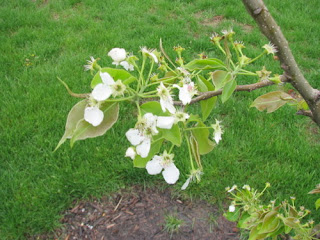 I'm loving that my Asian Pear tree is in bloom for the first time ever!  Don't you just LOVE Asian Pears?! 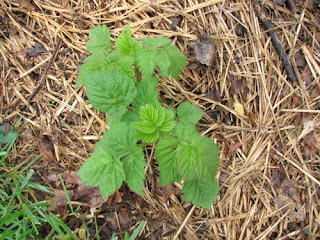 I'm loving that my raspberries are coming up!  I so worried over them last summer in the drought, stressed that they wouldn't pop up this spring.

Even among all the rain and flooding, spring and all of its beauty is underway on my farm!
Posted by Abby@AllAround at 10:31 AM 1 comment:

The fog is lifting!

Hello there!  I am embarrassed, slightly mortified that it has been ages since I posed last.  You see, the thing is I have been tired!  I mean, really tired.  The kind of tired that when you put your shoes on for the morning, you swear you could crawl back to bed and sleep for another 10 hours.  The effort of putting on shoes about did me in.  Honestly, the past few months any effort did me in.  I

Why have I been so tired, you might be wondering?  I am PREGNANT!  Whoo hoo!  I am three months along and I think the fog might be lifting!  Now hear me out, I know many, many women struggle with morning sickness, nausea, AND being exhausted.  I count my many blessings that I am only tired.  (Often times, while counting these blessings I would fall asleep in the recliner, but hey I wasn't running to the bathroom to get sick!)

So anyway, there was no energy left for blogging!  However, I hope to come back to the blogging community as my exhaustion turns back into energy!

I am due in mid-October and the Soil Stud and I are absolutely thrilled!  We cannot wait to meet the baby and become parents!  We heard the heartbeat about a month ago and it was beyond amazing! 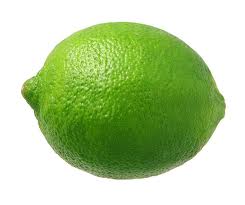 So now the baby is about the size of a lime!  Honestly, this picture is much better than the ultra-sound pic of a month ago.  I swear the baby looks like it's a worm in a cocoon!

Looks like my life and my body will become even more well-rounded with the addition of our little one!

Until next time,
Abby
Posted by Abby@AllAround at 6:28 PM 2 comments:

The Soil Stud had a crazy dream last night.   It went something like this...

The Soil Stud and I were walking together in a lush pasture.  (He didn't use the term lush.) 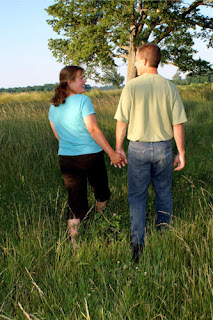 I am sure we were not holding hands in the dream.  But in my dreams, we always are!  (Soil Stud is not much of a hand-holder.  This is a picture from our engagement photos and he only held my hand because our photographer made him!)

So yeah, back to this dream...we were walking through the pasture and cows started stampeding their way towards us. 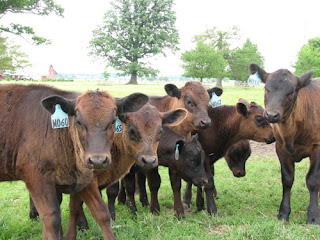 And just as they were about to knock us over....one cow stopped! 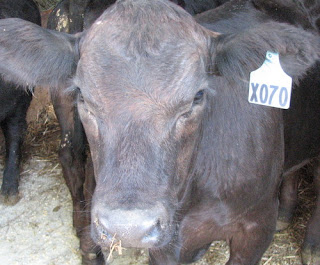 The cow opened her mouth and said:  "Taco Bell!"

Soil Stud has some weird dreams!  So as I hauled corn today I was thinking about his dream.  I came up with two interpretations of it.

Seriously, Soil Stud eats a lot of Taco Bell.  I think his subconscious is trying to tell him to lay off the Taco Bell for awhile.
Posted by Abby@AllAround at 4:04 PM 3 comments:

Last weekend the Soil Stud and I took our last road trip of winter.  We went and saw a dear friend of mine perform in Woodstock, IL just northwest of Chicago.  My friend, James and I served together as National FFA Officers.  He is from California and he is a wonderful person.  Also, another teammate, Andy who is originally from Kansas also came to the show.  Andy is also a wonderful person.  I have known both these guys for close to 15 years.  No matter how much time has passed between us it's as if we just saw each other last week.  I treasure our friendship, we have watched each other grow and develop in only ways good friends can.  You know how you have a handful of people who really know you?   I'd say James and Andy truly know me.  AND they STILL choose to be my friend.  I'm a lucky person!

So what was James' show all about?  Well.....he is the lead singer in a Johnny Cash Tribute band.  James has been a fan of Johnny Cash since he was like 11.  Actually, the word "fan" may not really describe his love for Johnny Cash and his music.  When we were National FFA Officers, James would get out his guitar and sing one Johnny Cash song after another.  If it hadn't been for him, I probably would never know any songs by the great Man in Black.  In fact, when Soil Stud and I were married, James, Andy, Emily (another FFA teammate) and I sang a few Johnny Cash tunes at the reception! 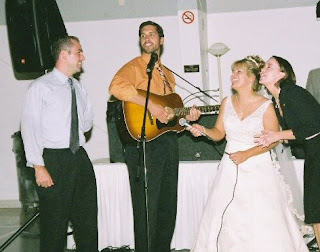 No wedding is complete until you sing Folsom Prison Blues.  :)


Soil Stud and I were running late, so my sweet guy dropped me off at the Woodstock Opera House front door so I wouldn't miss James coming out on stage!

When James came out on stage, I cried!  I was so proud of him! 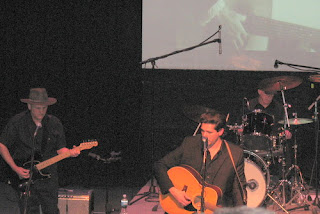 James and his band were amazing!  Simply awesome!

Shortly after intermission, in the words of my friend, Andy, I had to save the show! 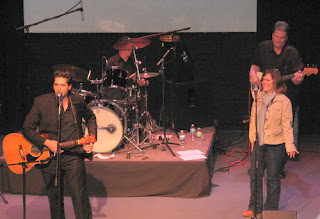 The band needed a female volunteer to sing "Mama sang tenor" in the song Family Circle.  NOBODY was volunteering, so I did what any good friend would do.... 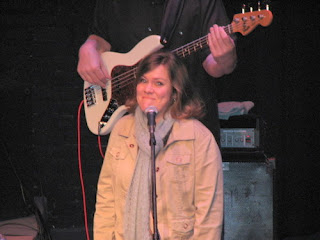 I sang my heart out!  Mama sang off-key!  AND I WAS WONDERFUL!  Well, not really, not at all. 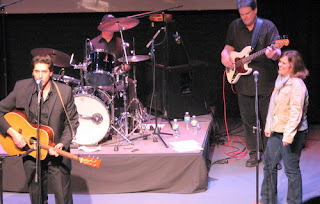 At this point I felt like I was in a Ring of Fire - it was hot and I was nervous!
Truth be told, it was a total blast, so if you are ever at a concert and are asked to sing - DO IT!  You'll be glad you did!

After the concert, we went out to share some old stories and new ones! 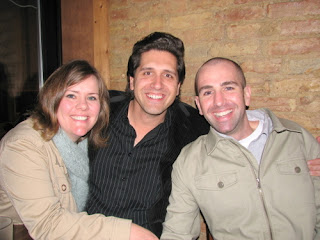 I already can't wait to see my friends again, in the meantime, I will listen to good ole' Johnny Cash!
Posted by Abby@AllAround at 7:16 PM 2 comments:

We have been busy calving.  By we - I mean the mama cows!  Here are a few pics, there is nothing I enjoy more than new baby calves! 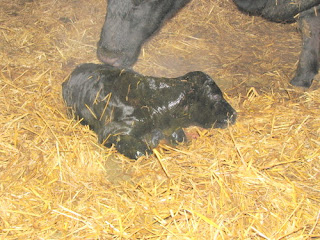 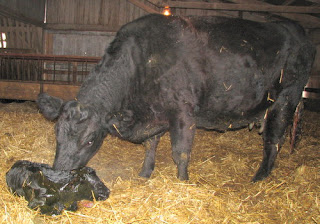 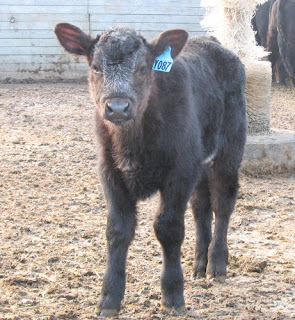 These three pictures are a sure sign that spring is almost here!
Posted by Abby@AllAround at 2:48 PM 2 comments:

All Around Abby in your Inbox!

Abby@AllAround
I am a wife, daughter, sister, farmer, knitter, cooker and gardener!

Search All Around Abby